Retrievable anchors are used prolifically in rope access, especially in the Industrial sector where exposed beams are readily available. There are a few techniques that can be used to build retrievable anchors, some better than others, but all achieve the same result.

The ones pictured utilise slings and pulleys to take the pressure off the rope over the beam, which protect the rope from a sharp or abrasive edge.

How do you build retrievable anchors? 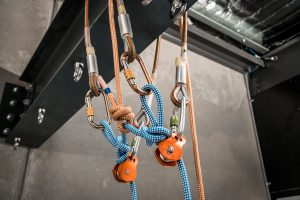 Before choosing to use Retrievable Anchors, all other means of accessing the beam to rig should be considered. As great as retrievable anchors are, there is always an unknown in the equation being the beam being used. If the beam is particularly abrasive or has a sharp edge, you expose your ropes to damage as you pull them over top. One would then commit to climbing those ropes to the beam before any damage may be noticed…

Beam choice is an important aspect here, location, quality, integrity are all things to consider. Even the beams emotional state comes into play, just kidding, beams don’t have feelings. Try to select a beam that looks to be in good nick, not one that’s corroded, rusty, or structurally compromised in any way and have a look to ensure its actually bolted into place.

Once you’ve established the beam you’ve chosen is of sound, mind and spirit, the first step will be to get a rope over it. This first rope will be used to pull the middle of another rope up and over the beam. This can be done with any rope, or if a throw bag and tag line are available, that option will definitely be the easiest. You may even use slingshots to launch the throw bags into the stratosphere if needed.

If you don’t possess the technology to reach low earth orbit, a simple rope bundle will do. Build a small coil that will be easily released with a slippery bight. Muster up your best Major League pitcher impression and throw for the back of the grandstand, hopefully you get it over first go. If not, reset and try try again, your mettle will be tested as the crew criticise every throw, but what better way to improve than be judged by peers?

Once you’ve established dominance by displaying your great throwing accuracy and power, simply tie or clip the middle of a rope to the tag line and haul it up over the beam. Bring the loop tied in back down to the ground and tie two alpine butterflies on each side of the middle. Be aware that you may use the tail of one of the ropes as the retrieval line, if you choose to do so, ensure there is enough rope to reach the ground as well as pull the system down.

At this point you have some options. As if throwing the rope over the beam didn’t take enough time, now the floor will be open for debate between which methods work best. As you desperately try to hold onto your evaporating control over the situation, the crew will begin to squabble over cross loading carabiners and nylon rubbing on nylon.

Remember safest option is the one that exposes the rope to no load, as the only unknown is the beam itself. So if you planned ahead and brought the gear as a good supervisor should, you’ll have a couple slings, some spare carabiners, and two pulleys. If not, prepare to use your outside voice and tell the crew how it’s going to be, you may have to commit to being your own Guinea Pig if you’re not convincing enough. Not to say other options aren’t just as viable, but the judgement by your crew and further by the online community may be enough to dissuade you. Especially if your retrievable were to make it online with the caption “What do you think of this set-up?”

Out of fear, you choose the safest option, even if it means wasting more time by sending someone back to get the gear, Rope Access is still faster than scaffolding right? Right.

With two butterflies tied on each side and the middle of the rope over the beam, either a retrieval line or the tail of one of the access lines will be tied to said middle. Clip a sling into each butterfly, on the other end of the sling attach a pulley, thread this pulley onto the rope opposite of the butterfly ensuring it’s the same rope. Do this for each rope, because in rope access we use two ropes, therefore you need to do it twice…

Check the system before you pull it up to the beam and ultimately trust your life to it. Identify the retrieval line, ensure all the carabiners are closed and locked, and tie stopper knots in the end of the ropes.

Once you’ve checked over the system, pull down on the ropes below the pulleys, this will begin to pull the entire system up into the air, towards its final resting place over the beam. As your glorious creation rises like phoenix out of the ashes of lost time and bickering, have one of your minions hold the retrieval line slightly away from the beam. This will help the knots and hardware work their way over top as you pull.

Once the hardware reaches the beam, you’ll have to pull a bit harder to force the system into place. So, make sure your wearing a short sleeve shirt and get the attention of someone your trying to impress, then pull the final meter or so until you hear the satisfying clunk and watch as the pulleys bind on the alpine butterflies causing the system to stay in place. Do a quick check by pulling on the retrieval line, which should be pulled over top of the beam, doing so should pull the alpines up and away from the pulleys.

If your system gets up and over the beam without any issues and pulling down on the retrieval line pulls up on the alpines. Bask in the glory and praise of your subordinates and try not to look nervous as you harness up and use the system for the first time.
If something goes wrong or doesn’t seem quite right, don’t let your ego get the best of you. As embarrassing and pathetic you may now feel, using all this time to get the thing in place. It is much better to feel this way and not be dead or permanently disfigured. So, pull it back down, amongst the ridicule dished out by your crew, to re-check or re-configure everything before sending it back up again.

Once you’re sure everything won’t come falling down in catastrophic fashion, jump onto the retrievables and get to work! You’ve wasted enough time already… Don’ forget to bring something up to build a regular system with, retrievables shouldn’t be used as the primary means of access for a crew. They should only be used for the last tech to come down or for the first tech to get up, but don’t let me tell you what to do, I’m not your mother.

Once the day is done, and you’re ready to pull your marvellous creation back down to the ground, untie the stopper knots at the ends to save yourself from looking like you don’t know what you’re doing, and pull down on the retrieval line. If you did everything correctly it should be smooth sailing down to the ground, you can remove all the hardware and untie all the knots before pulling down the last loop.

Congratulations! You’ve just survived another day on the job, if you hit some hiccups along the way take it as a learning experience. If not, nice work you excellent rope tech you. The townsfolk will sign your name is praise for years to come.